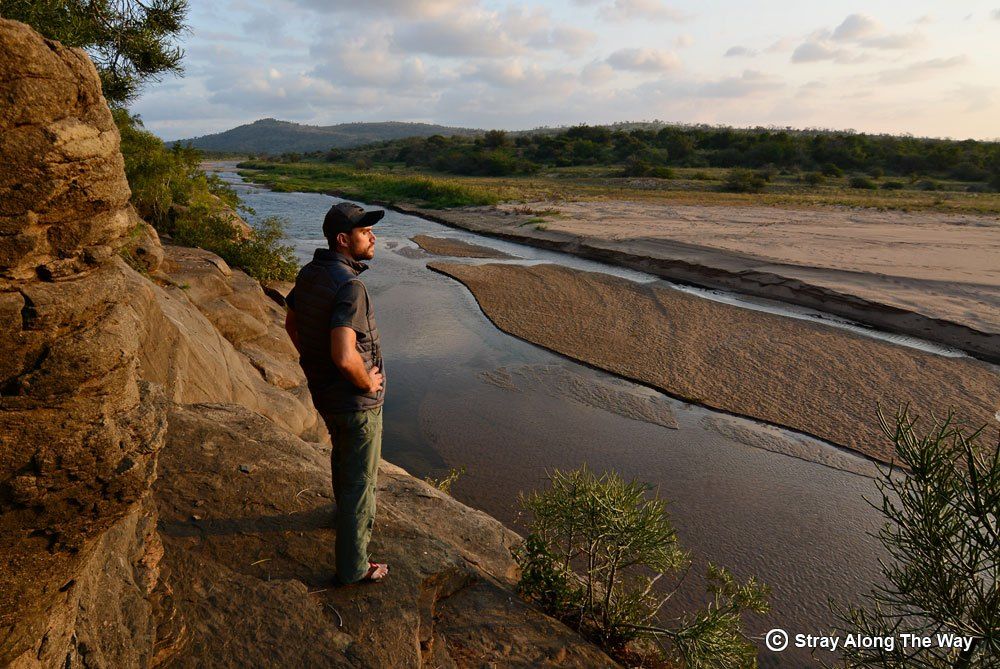 Wilderness Trail Experience - With Stray Along The Way

The idea of heading out on a wilderness trail might seem a little bizarre to some. Who would willingly give up every modern convenience, including the basics of a bathroom, to spend time out in the wild, sleeping on the ground and exposed to the elements? What is more, what could be the point of doing this in a big 5 game reserve, where dangerous animals roam free?

For Bevan and I though, a wilderness trail through the African bushveld was a definite bucket list item. A little discomfort and primitive conditions seemed a small price to pay for an absolutely immersive experience in the wild. We were privileged to join the Wilderness Leadership School on a 5-day wilderness trail in the Hluhluwe-iMfolozi Game Reserve, Africa’s oldest established wilderness area and the ancient hunting grounds of Zulu King Shaka. What is more, although wilderness trails are offered in a few other reserves in the country, this particular destination is even more special because of its association with the late conservationist Dr. Ian Player and Operation Rhino in the 1950s, which brought the white rhino back from the brink of extinction and allowed areas from which it had disappeared to be repopulated. 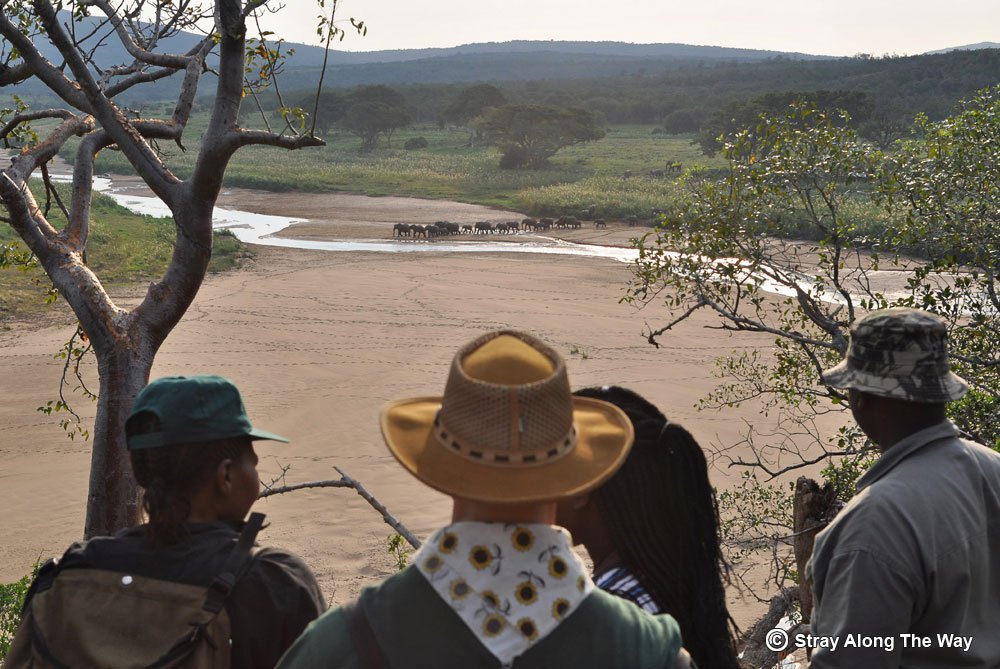 The days leading up to our trail departure were full of excitement and anticipation! We checked and rechecked packing lists, charged camera batteries, gathered our thermal underwear, raincoats and hiking shoes. I have never been more lightly-packed for a five day trip before – two shirts, one pair of pants, two warm jerseys and five days’ of socks and underwear! Anything we took with us we would be carrying, which was incentive enough to be sparing. Furthermore, whatever we carried into the wilderness we would need to bring out again. The ethos of this experience was to have minimal impact, and to leave no trace of our presence. This was going to be a chance to be as in-tune with Nature as we could possibly be.

The first instruction we received from our guides Mandla and Siphiwe upon our arrival at the Wilderness Leadership School was to leave all of our personal devices behind. We dutifully handed over phones, wallets, car keys and even watches – anything that could distract us during our experience and that represented a tie to the modern world. With that, and with backpacks stuffed and food bundles distributed between the group members, we set off for the Hluhluwe-iMfolozi Park.

Some three hours later we arrived at the park gates. After a quick lunch, we were driven into the reserve to a spot well off the main tourist roads. After parking the vehicle and kitting up, we formed a line behind our guides and simply walked away from the last contact we would have with the outside world.

I am not sure why some things work out the way that they do. With our packs fully laden, and our nerves at their most raw and least attuned to the bush, we ran a gauntlet of seven white rhino and a single bull elephant scattered in small groups across our route to our first camp. Trying not to disturb these animals, our guides led us in a wide circle around them giving us plenty of cover and the animals plenty of space, stopping briefly at a safe distance to give us a chance to take it all in. 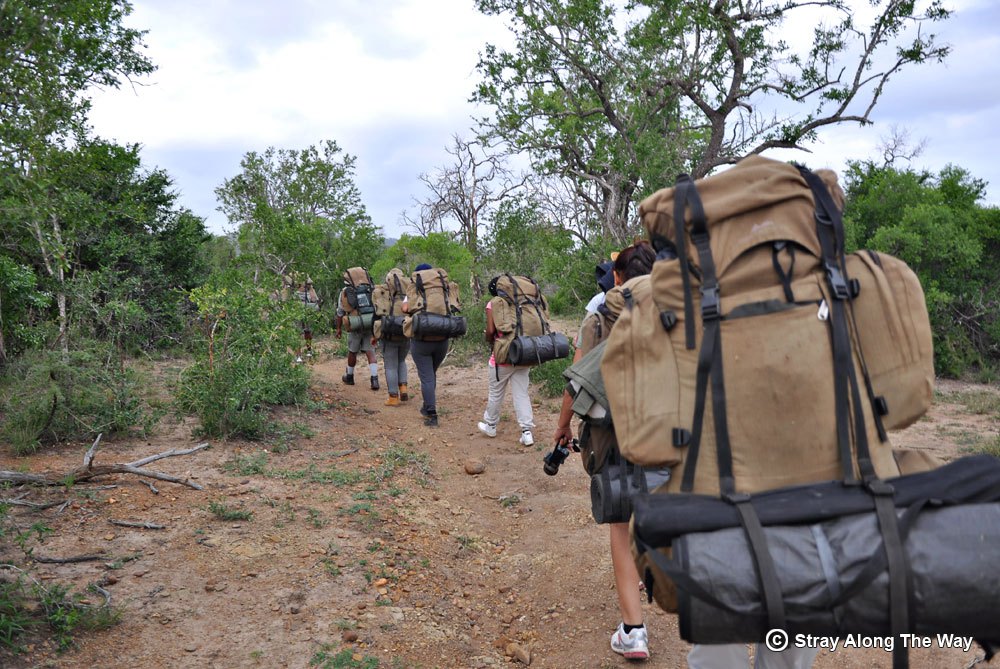 Setting up camp on a rocky ledge on the edge of the White Umfolozi River later that afternoon, we were able to reflect on where we were and how we had gotten there. As the evening settled in, a chorus of frogs picked up, to be followed in the predawn hours by the eerie whoops of a hyaena in the distance. The clouds dimmed the light of the freshly-waning moon and wrapped us up like a thick blanket against the chill of the falling dew. With the solid rock beneath us, golden firelight and crackle of the campfire burning close by and the intermittent torchlight of each member of the group taking a night shift to keep track of animal movement around camp, we were home. 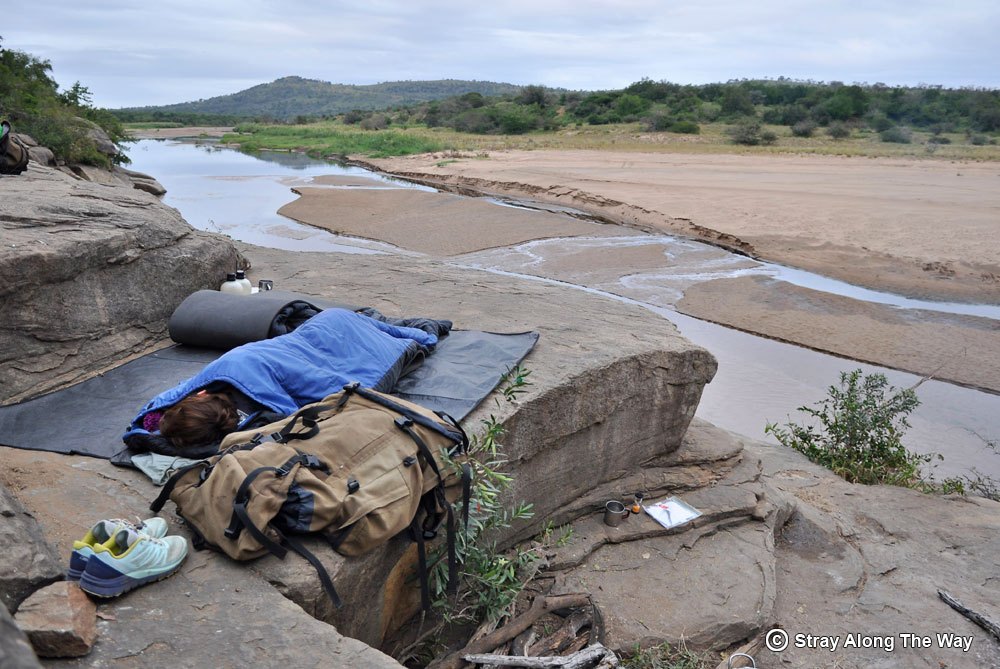 On foot in the bush

Our next few days settled into an easy rhythm of a quiet wake up and slow morning around camp. Kitting up with day packs, we set out on foot each day. As we walked Mandla would point out small details or interesting features, explaining the early Zulu heritage of the area, interpreting animal spoor and details such as the Zulu cultural use and significance of the Buffalo thorn, Ziziphus mucronata.

Being on foot among large game is a completely different experience to viewing them from a vehicle. With nothing to protect you but your guide’s bush savvy and ability to read animal behaviour, an awareness of which way the wind was blowing and legs ready to beat a hasty retreat if necessary, this game viewing experience is as much humbling as it is exhilarating.

Added to this is the immersive nature of the experience – listening to the sound of branches cracking as an elephant feeds, the powerful scent of the midden of a mature male rhino as you walk past or the abrupt alarm call of an impala startled by your presence. On foot, you are also able to appreciate the smaller details – a dung beetle carapace-deep in a steaming pile of buffalo dung, the verdant green of new leaves opening on a bush or the bright colours of a Little Bee-eater on a nearby Acacia tree. 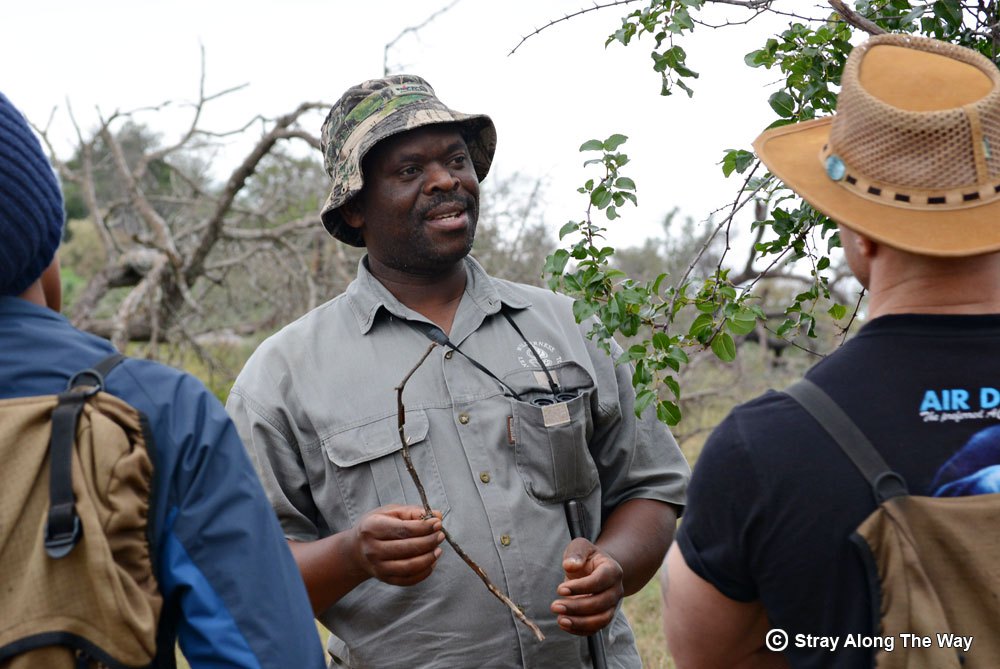 There are so many memories from our time on the wilderness trail. One of my personal highlights was hearing elephants trumpeting a greeting in the near distance down by the river while we were still en route to camp from a long day’s trail. The thrill of that powerful and raw call, and the excitement I felt at knowing that we were close by. All I wanted was to rush ahead to be sure we didn’t miss them as they passed! I shouldn’t have worried because in the end, the timing was absolutely perfect and we arrived back at camp in time to watch two herds of between 30-50 elephants converge on the river and cross the wide sandy bed right in front of the setting sun.

There was also the thrill of finding fresh lion footprints, and of walking up on a black rhino in the bush – definitely an animal you want to give a wide berth to because of its bad temper. Maybe I am spoiled though, because as incredible as these experiences were my overall favourite animal encounter was with something far less rare…

Enjoying some afternoon sun on the rocks above the river one afternoon, Bevan and I were disturbed by a troop of baboons that made their way down from the slope above. Anyone who has watched a troop of baboons or the smaller vervet monkeys can quickly draw parallels between them and our own human interactions as the animals groom, tease or bicker with each other, and for this reason I always enjoy watching them. Sitting quietly as we were they didn’t seem too perturbed by our presence and we were able to observe them in peace. Trailing behind the main troop, a small group of adolescents settled down on a rocky outcrop a small distance from us. One baboon in particular took an interest in us and a game of chicken ensued, with it seeing how close it could safely sneak up on us. Every few steps it would balk and quickly run back to the safety of the group until, emboldened by its previous attempts (or with its pride at stake because of the presence of its watching peers!) it sneaked up to a small bush barely three metres away from us and proceeded every few seconds to poke its head cautiously around the cover to gaze at us before ducking away again. “What strange, hairless creatures are these that have moved into our territory”, it must have thought?

A time of reflection

Nature is a place of healing for many. Whether it is the peace and solitude of a mountain scene, the power and chaos of tumbling waves or the liquid call of a Burchell’s coucal drifting over thornveld, being out in Nature provides nourishment for the soul. 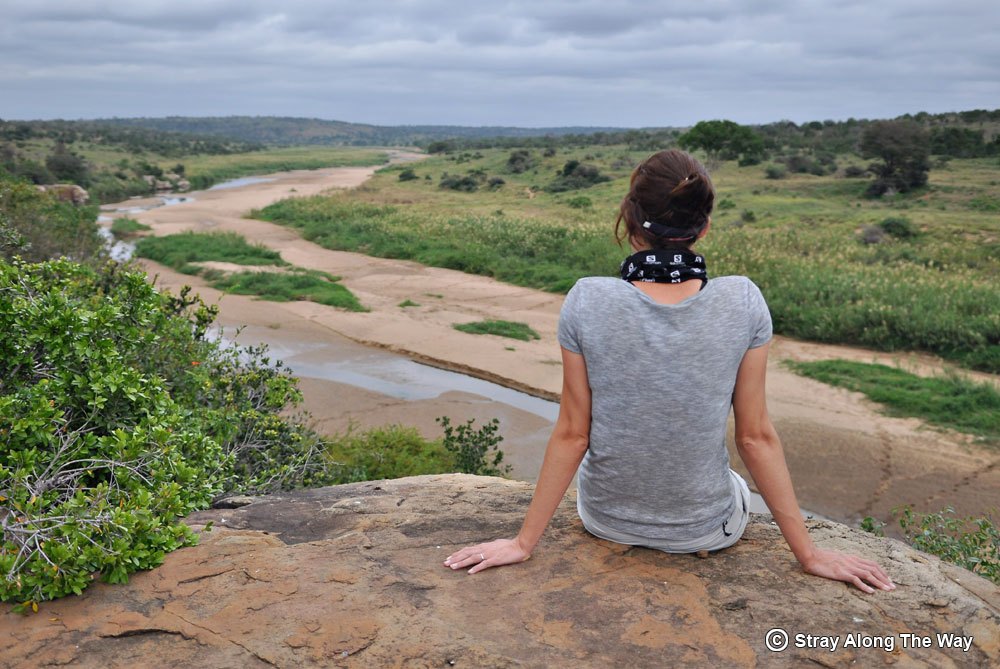 Five days in the African bush on our wilderness trail allowed valuable time for self-reflection and introspection. Combined with the absence of modern distractions, it was a chance to reconnect with Nature and with ourselves. Added to this, it reinforced and put into practice some very valuable life lessons. For example, the principles of teamwork and being unselfish; on trail everyone walks at the pace of the slowest member so that no one is left behind. A successful trail relies on everyone pulling their weight and sharing tasks including carrying food and preparing communal meals. At night, every person takes a turn to guard the sleeping camp and during this time, the safety of your group members rests on you performing your task well.

The aim of the Wilderness Leadership School is to restore the balance between humans and the Earth through a personal experience of wilderness. As Mandla further explained, wilderness guides facilitate a service to Nature. By taking the time to be present on the trail, we were paying back to Nature. As a practical example of this, poachers are deterred from operating in areas where there is other human activity. By walking the trail each day and with our camp light visible at night we were playing a small role in the fight against rhino poaching in the iMfolozi wilderness area. 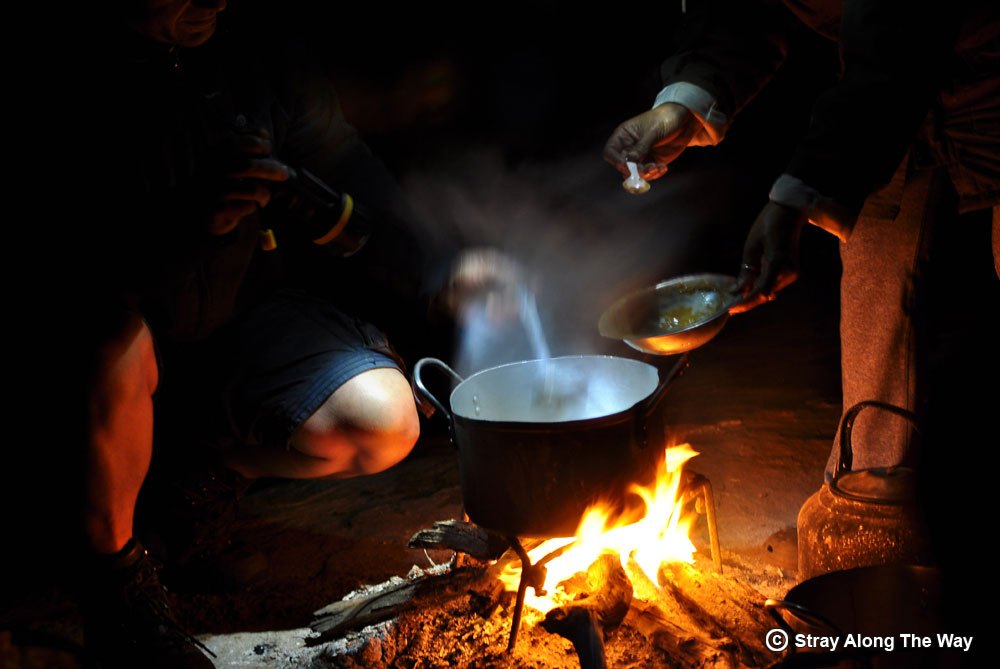 Back at home, I find myself longing for the simplicity of the bush, the easy rhythm of the sun rising and falling on each day and the feeling of having been fully a part of every moment in between. The exhorting “work-haaarder” call of the Ring-necked dove (Cape turtle dove) has been replaced with the silently screaming demand to work harder! In the modern world with its many pressures we are cut off from the wilderness, and distracted from the simple beauty of life and its passing moments.

The experience of being in the wilderness is one that I will forever treasure. Although learned in the bush, many of its lessons are metaphors for everyday life. As our guide Siphiwe beautifully put it, in life too you will encounter rhinos and elephants on your path that you must learn to walk around to get to where you want to go. Be aware of which way the wind is blowing, and you will find a way around them.

This email address is being protected from spambots. You need JavaScript enabled to view it.